Fossils: A Window onto God’s Creation 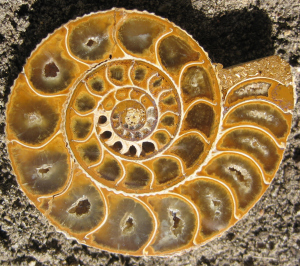 What can fossils teach us about God? Lizzie Henderson earned a degree in natural sciences from Cambridge University and is currently working at The Faraday Institute. Lizzie spent much of her time at university studying geology and evolutionary biology, and she is passionate about using her science to help others explore questions of faith.

As a child, I was captivated by fossils. Whilst I spent my fair share of time playing with dolls, building dens and generally getting into mischief, I also spent many happy hours scouring beaches, gardens, car parks – anywhere that might yield these rock-clad treasures. This might seem a slightly strange way for a young child to spend her time, and it earned me a few comments over the years, but my fascination with fossils only grew. Eventually it contributed to my decision to study evolutionary biology at Cambridge.

Some fossils are really pretty, but that wasn’t the only aspect of them that caught my imagination. I was, and still am, enchanted by the idea that a shape preserved in a rock that I can pick up off the ground used to be a living creature – something that was part of a time and environment that are long gone.

Just as photos, paintings, letters and other artefacts give us glimpses of times when powdered wigs were in vogue, penny-farthings were the way to travel and anyone who was anyone was buried in a pyramid, fossils allow us glimpses into a far more distant history. They tell us of times when two-foot dragonflies swarmed through forests of giant moss, when plains were home to herds of dinosaurs and pterosaurs ruled the skies.

Fossils teach us what life used to look like, providing snapshots of a prehistory which would otherwise go unknown. From fossils we can piece together not only which creatures were around and what they looked like, but also what they ate, how they moved, where they lived and even, in some cases, how they behaved and interacted with each other.

For me, fossils open a window into the past that feeds directly into my appreciation of God as creator. It’s very easy to fall into the trap of thinking that we are sole point and purpose of creation – that God’s creative process was one-track, rushing towards the goal of humanity. I’m not denying that we are very special to God, but the picture of creation that the Bible paints celebrates each moment and stage of his creative process as a totally unique and beautiful expression of his glory and splendour in its own right.

So God created the great creatures of the sea and every living thing with which the water teems and that moves about in it, according to their kinds, and every winged bird according to its kind. And God saw that it was good.

But that’s far from the only contribution of fossils to science and my appreciation of God’s creative process. Biologists have discovered some amazingly clever and complicated forms, structures and functions. By bringing fossils into the picture we can begin to trace their development through time, transforming awe and wonder at the unknown into awe and wonder at the incredible nature of living things.

This point can be illustrated by one of my favourite stories of development. The familiar hammer-anvil-stirrup arrangement of bones in our middle ear is a defining feature of all living mammals. What’s not so commonly known is that two of these bones haven’t always performed a hearing function in the ear.

The closest living relatives of mammals, birds and reptiles, have only one middle ear bone: the stirrup or ‘stapes’. So where do the two extra bones in our middle ear come from? Scientists have spent 200 years investigating in this question, and their work has revealed a spectacular example both of evolutionary change and the power of integrating scientific disciplines and techniques.

A combination of fossil data with comparative anatomy and developmental biology has revealed that the hammer and anvil bones in the mammalian ear are homologous to (the same bones as) the ‘quadrate’ and ‘articular’ bones in the jaws of birds and reptiles, and also the ancestors to modern mammals. Three main pieces of evidence support this idea.

The fossil record has allowed scientists to trace the development of the mammalian jaw from a composite structure similar to that still seen in birds and reptiles, to a single solid bone. The theory is that selection for factors such as more effective bite force, muscle attachment and tooth alignment may have allowed this change in function for the bones.

In mammalian foetuses the hammer and anvil bones begin their development near the jaw, forming in the same way as in birds and reptiles and later move to the ear region. We also know from studying living animals that the quadrate and articular bones of the jaw can be used to detect vibrations, so it’s not surprising that they have also become useful in the ear.

To me, scientific stories like this show astounding beauty. The knowledge that we gain through this kind of study informs, enhances and deepens my appreciation of the creative nature of God who designed and brought into being such amazing variety, both now and at every point throughout history.