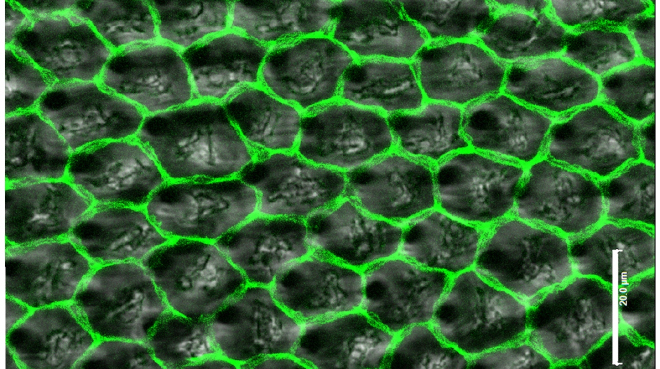 As I child I wondered what would happen if my bones grew at a different speed to my skin? Would the bones pop out or would I have floppy boneless regions? How did everything coordinate? As with most childhood questions, below the surface of the apparently childish simplicity there is a deep scientific question which parents often battle to answer.

Your body’s fantastic ability to self-assemble and self-organize so that body-wide function and cooperation emerges from the small-scale actions of individual cells is just one of the wonders of the living world.

This work of coordinated art is an active area of research. The level of complexity is amplified by the variety of different ‘players’, interactions, feedback controls and chemical signals which vary over time and space. Within this diverse system we will zoom in on one tissue type.

Epithelial tissue is made of sheets of cells which line body surfaces, cavities and organs, and these cells are the most prolific type of cell in human bodies. Epithelial cells maintain a closed barrier to the external environment and so protect the system they line, alongside a variety of other location-dependent functions. However, scientists studying the epithelial layer have found that the large-scale function of this layer is in fact created and maintained by a surprisingly simple mechanism acted out on a small scale by many simple individuals. This link between local and global – how local cell action results in high-level tissue structure – is important in learning more about these cooperating, self-organizing systems.

Drosophila melanogaster By André Karwath aka Aka (Own work) [CC BY-SA 2.5], via Wikimedia Commons

Epithelial tissue is common throughout the animal kingdom, and scientists Matthew Gibson Ankit Patel, Radhika Hagpal and Norbert Perrimon have set about researching it by studying Drosophila melanogaster, more commonly known as the fruit fly. The fruit fly wing starts as an epithelial sheet that grows from 20 cells to 50,000 cells over 4 days during larval development.

Upon closer inspection it has been found that the epithelial cells in this layer are different shapes, with 4-9 sides. The impression this creates is one of a cobblestoned street as opposed to the more uniformly structured regularity of a honeycomb. If tasked with building a wall, would you not use same-sized bricks? Similarly, would you not expect an ordered system to be based on consistent shapes? Further research into the different shaped cells shows that they are consistently found in specific ratios. Not only that, but these same ratios are observed across different animal groups. How does this irregular and yet consistent layout come about through the behaviour of individual cells?

Using laboratory techniques, Gibson and his colleagues were able to make the cell interfaces fluoresce so they could make time-lapse movies of the growth dynamics. They saw no movement of cells to suggest that they were being sorted into a specific arrangement. Instead, simple mitosis (cell division) is enough to explain the emerging pattern.

The team of scientists modelled this process using mathematics and computer models to predict, based on rules of cell biology and mitosis, an equilibrium of approximately 29% petagons, 46% hexagons, 21% heptagons and lesser frequencies of other polygons. They then painstakingly counted the different types of epithelial cell shapes in real specimens and confirmed that the predicted ratios were indeed reflected in all the organisms they checked; frogs, freshwater hydra and fruit flies. So although the epithelial landscape appears irregular, it is not random – order emerges[1]. 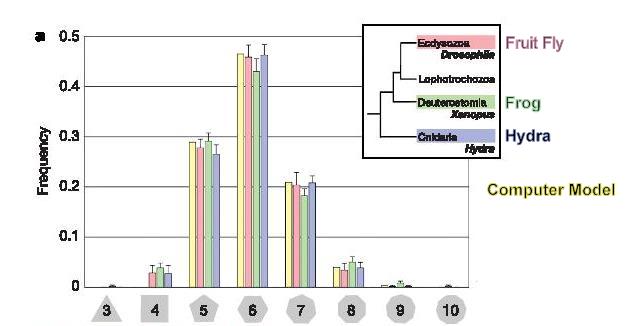 Cells gain additional sides as their neighbours divide. When it is their turn to divide, the daughter cells have fewer sides. Amazingly, these gains and losses in the number of sides balance out, resulting in the shape distribution discovered.

The principles of cell adhesion and mitosis are fundamental to biology, so this simple mechanism can be used to study a variety of similar systems across many different animal groups. Furthermore, the study of self-organising biological systems can also bring insights into the fields of robotics and computer science.

“Biological systems, from multicellular organisms to social insects (“superorganisms”), get tremendous mileage from the cooperation of vast numbers of cheap, unreliable, and limited individuals. As we build artificial systems with similar characteristics — robot swarms, modular robots, sensor networks, programmable materials — can we achieve the kind of complexity and reliability that nature achieves?”

This tissue’s ability to generate and maintain order during growth is one of the many wonders of developing bodies. However, with it we are just scratching the surface of the myriad of processes which run, unnoticed by us, to organise and shape our bodies.