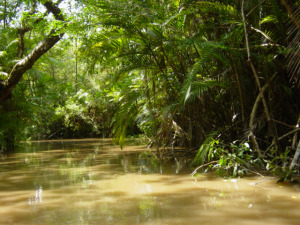 To continue my series of scientist’s life stories (part 1 here, part 2 here), this week’s post is from Sir Ghillean T Prance, a botanist and ecologist whose career has taken him to the forests of Brazil, the New York Botanical Garden and Kew Gardens. He is currently the Scientific Director of the Eden Project and a trustee of the Christian conservation group A Rocha. Prance became a Christian at university and was accepted for ordination in the Anglican Church, but decided that science was the best place to use his talents. Here, he describes how his research and his faith have complemented each other throughout his career.

I first went to the Amazon region in 1963 to study plants and to collect material for basic taxonomic work. During the first ten years of my exploration in Amazonia I was privileged to travel widely and had a wonderful opportunity to carry out research in the region, with little concern for environmental issues. It was a time of learning about the plants and the animals with which they interact. The more I understood complicated pollination mechanisms by bats, beetles, birds and butterflies, and the ways in which plants defend themselves against the hoards of leaf-eating predators, the more I marvelled at creation.

By 1973, however, the situation in Amazonia had changed drastically and large-scale development, accompanied by massive destruction of the forest, had begun. For example, the TransAmazon Highway and its colonisation plan was inaugurated in 1970 by President Medici of Brazil. While teaching an ecology field class at Altamira, on the TransAmazon Highway, with environmental ecologist Robert Goodland, I began to realise how serious the issue of deforestation of tropical rainforest had become.

We could see that much of the devastation was in vain, for projects that were unsustainable were being undertaken. For instance, unproductive land was being used as cattle pasture, but could support less than one cow per hectare over the eight-year lifetime of the field before it had to be abandoned altogether. Cattle farming was being sustained by a completely false economy of tax incentives and land speculation.

This first-hand experience of the futility of much of the deforestation led me gradually to change the emphasis of my research interests to a much more applied approach. I worked far more on economic botany and became concerned about some of the environmental problems related to the use of tropical rainforest. This involved both the search for new plants of possible economic use and the study of the ecology and land use systems of the Amazon Indians. I am sure that I was able to make this change in direction more easily because of my Christian faith and the consequent concern for justice and peace.

However, it was my faith that was strengthened from this experience because finally my botany and my faith came together; the dichotomy between work as a scientist and my church life had ended. The two began to strengthen and to complement each other in a new way rather than being separate compartments of my life. The biblical command of Genesis 2:15 to till and to keep (literally, to serve and preserve) the land began to take on a new meaning for me. I could add my own list of the wonders of creation to those of the psalmist who wrote Psalm 104, that wonderful hymn of creation.

As I have become more involved in environmental issues, I have not just attempted to introduce more green issues into the churches, but rather, my research interests have been stimulated by my faith. The two aspects that have been most helpful are the study of creation and the Creator, and the biblical basis for justice and equity. It is no longer enough for me merely to classify and describe the plant species of the Amazon forest; I must also use my research data to address issues of deforestation, pollution, starvation and other problems that surround us today. I am a much more concerned person because my faith helps to remove more selfish motives.

Recently*, the Brazilian Minister for the Environment echoed the words of Lynn White, in his 1967 paper, that blamed Christianity for the current ecological crisis. The Minister said in March 1990, ‘Christianity is at the root of the destruction of nature and the rainforest. Once you invent a god separate from nature, nature does not matter any more. It’s something to use as you please. The Hindus, the Buddhists, saw nature as perfect and tried to harmonise with it.’ The challenge for the future is to set this record straight and to show that those who know the Creator through a relationship with his Son, Jesus Christ, also become the stewards of the creation with which we have been entrusted. This will make the work of the Christian ecologist all the more of a challenge in the future.

*This post is a series of excerpts from Sir Ghillean Prance’s chapter in the book Real Science, Real Faith (Monarch, 1991), reproduced online by permission of the publisher. You can read the full chapter here.  A previous post about Ghillean Prance can be found here.