Book Preview: Is There Purpose in Biology? The cost of existence and the God of love 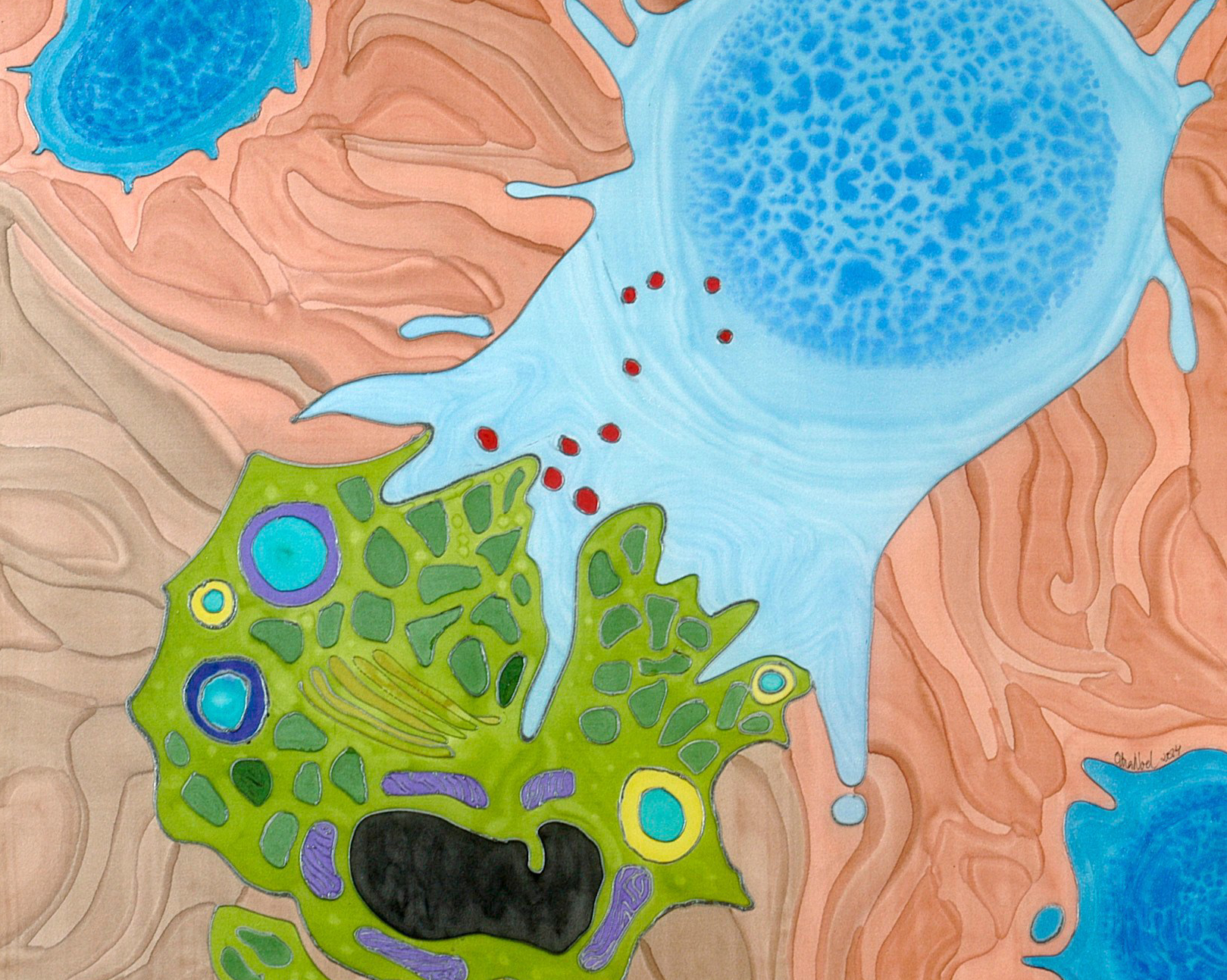 ‘St George and the dragon’, an artistic interpretation of a T lymphocyte killing a cancer cell, Wellcome images, © Odra Noel

Reactions to the question “Is There Purpose in Biology?” are likely to vary greatly. One reaction will be “of course not”: watch your favourite natural history programme and it’s obvious that chance rules. Some animals get lucky and do well, others get eaten young, and there’s no overall rhyme nor reason to it. Others responding to the same question, most likely coming from a religious worldview, will respond “of course”: God has an overall purpose for everything, including biology. Others, perhaps the majority, are more likely to say: “Well it all depends on what you mean by purpose…”

Finding defenders of the first view, that the natural world is necessarily purposeless, is not difficult, especially those who have the evolutionary history of life in mind. For example, Professor Peter Atkins, Emeritus Professor of Chemistry at Oxford University, states that “A gross contamination of the reductionist ethic is the idea of purpose. Science has no need of purpose.”

So the question I wish to address is this one: Is it necessarily the case that biology in general, and the evolutionary process in particular, tells us that it has no purpose? The question is carefully worded. If I were asked the question: “Does evolutionary history necessarily demonstrate that there must be a purpose in biology?”, then I would answer simply that I don’t think that questions concerning ultimate goals can be derived so readily from the study of science. The scientific observations might make an affirmative answer more or less plausible, a point to which we will return later. But science alone is not up to the herculean task of demonstrating Purpose in any metaphysical sense.

It is clearly important to first ask what we mean by “purpose”. It helps to discriminate between purpose with a small “p” and Purpose with a big “P”. Unlike physics and chemistry, biology is full of the language of purpose and has been ever since Aristotle. The beaver builds its dam in order to protect its home from predators. This is purpose with a small “p”. All biologists use such language all the time, but no biologist today would be tempted to extract any metaphysical inferences from the use of such language.

Looking at the quote cited above from Atkins, it is clear that his denial of the “small p” purpose is not what he has in mind, but rather a denial of Purpose, a denial of any ultimate reason for the existence of a biological process such as evolution. Likewise when Dawkins writes about “the universe we observe” that “there is, at bottom, no design, no purpose…”, this is clearly a metaphysical claim about Purpose with a big “P”. Evolutionary biology itself, so the argument goes, renders it impossible that evolutionary history, taken overall, could have any rhyme or reason. Chance rules. Our own existence is a lucky accident. Biology is necessarily Purposeless. It is this metaphysical inference from the biological account that I wish to challenge.

How would we know that a process is necessarily purposeless? The kind of static that would sometimes fuzz up old fashioned TV screens would seem to be a good candidate. Rocks of various kinds scattered randomly across a beach, likewise. It is hard to see how these facets of the world around us could be endowed with some deeper overarching purpose. But what about systems that start simple and gradually become more complex? That in itself does not demonstrate purpose. On the other hand, it might make it more difficult for us to conclude that such systems are necessarily purposeless.

What about our own lives? We could in principle track that very sperm that fertilized that very egg that became us. Out of the millions of sperm on that day, it was that particular sperm that won the race to fertilize the egg, thereby determining that we would be male and not female, or vice versa. And then we could track our development from that moment on, with all the complex gene–environment interactions involved, with thousands of chance events contributing to the person that we are today. Yet would an intimate knowledge of all those apparently random events, together with a detailed history of how our own decisions had changed the course of our lives, lead to the conclusion that our lives are necessarily Purposeless? It is hard to see why that should be the case.

Considering these various uses of the “Purpose” word at least highlights some of the problems in using it unthinkingly. My book on this subject has five main points:

This post was adapted from the introduction to Is There Purpose in Biology? The cost of existence and the God of love by Denis Alexander, which will be published by Monarch on 18th May 2018, price £9.99. Used with permission of the author and publisher.