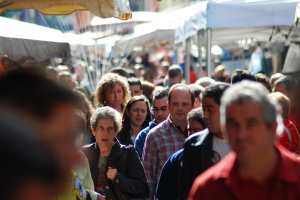 This month’s guest post is from writer Emily Ruppel, Associate Director of Communications for the American Scientific Affiliation, and Web Editor at BioLogos. Here, Emily tells about her unusual route into the science-faith arena, which began with a nun.

A few years ago while studying in the science writing master’s program at MIT, I heard about something rather brilliant from a friend at Harvard University. Brilliant things happen at Harvard all the time, of course, but this was ‘brilliant’ in a different way—unexpected, illuminating, and challenging, for the people it happened to. It opened up a course of conversation previously unavailable to its participants. It was controversial, too, in a quiet way.

What happened is this: a graduate student studying astronomy sent an email to her department announcing her imminent departure from the program. She had no qualms with administration nor academic difficulties to my knowledge. It’s just that, in her life, at that time, it had become impossible to ignore the calling to become a nun, rather than an astronomer. To study service and the word rather than cosmic forces and the vast heavens. Her love of Jesus, she wrote in her letter, was very important to her, and this path she was about to embark on, it seemed, would be the only truly fulfilling work she could spend her life doing.

I don’t know much else about the letter or its writer—whether the decision was sudden and easy or difficult and drawn-out, or maybe a mixture of all these things. I do know that surprise and chagrin rumbled throughout the astronomy department, where folks questioned what seemed an illogical and perhaps ill-fated decision.

But there were also responses that were personal and positive. They came in the form of letters back, where other current students, my friend among them, expressed their support for their colleague and the fact that they, too, loved Jesus and wished to serve and know him more fully.

This was about that time that Owen Gingerich, professor emeritus of astronomy and history of science at Harvard, also a Christian and who, finding himself at something near the center of this web of emails, decided the writers of supportive letters should probably know who each other were. A small community of Christians emerged within the astronomy department and began meeting and exploring what it means to be young scientists in a secular age not often welcoming of religious belief (especially Christian religious belief).

I share this story for two reasons: the first being that I can, because I got to know a few of these folks at their gatherings and deeply appreciated being in the company of such thoughtful, and even, I might say, spiritually and intellectually animated young Christians. They taught me a lot about how to stand up for my faith when I wasn’t in the company of people who understood it and had strong negative opinions about it—including my teachers and a few of my good friends.

I also share it because I think it’s interesting that these fellow Christians would not have known they shared similar faith commitments if their colleague hadn’t made the decision she did. And this, rather than being surprising, is expected. In fact it makes a lot of sense.

In my own experience, being from Kentucky, at home I sometimes feel almost more accepted among strangers when wearing a cross or some other Christian symbol in public, but in a different environment, like the pub at MIT, these symbols might not represent what I want them to represent. That is, I want them to say that I am a member of a community of people dedicated to following the teachings of Jesus Christ and yes—who believe some pretty spectacularly confusing things—yet who interpret both this fidelity and this confusion as worthy additions to a life spent searching for truth wherever it leads, and modifying our thoughts, our passions, and our behaviors accordingly.

But it doesn’t mean that to a lot of the people I know. To them, the sign of the cross is a sign of ignorance and small-mindedness. It represents a group of believers who automatically reject anything and everything that threatens the way they think about God and the universe they live in. It represents a bullying, fear-mongering attitude about faith and why it’s important.

This is not the message I want to send about what I believe. While it’s true that I am not responsible for the reaction strangers might have to my preference for wearing a cross or not, and that the kinds of people who would label all Christians with the above characteristics without even knowing them first clearly have some problems with ignorance, bullying, and small-mindedness all their own, I do find myself worrying about this sort of thing. About why, in certain circles, I have felt a keen sense that I should keep my faith in the closet. Don’t ask, don’t tell. Mention off-hand that I go to church, and someone nearby might start dialing back my IQ. I don’t want that. Who does?

Perhaps if it starts conversations—but that’s a big investment of time and energy that we might not always have, so in the meantime, it may seem better to just keep quiet until I know I’m around people who want to engage, not declare shallow opinions formed from a lack of understanding or willingness to reevaluate. Otherwise, we’re just tossing barbs and bombs from the trenches. While working as a communicator of science, I’ve seen both secular scientists and Christians slip into labeling, binary thinking (you’re either with us or against us!) and far too much debating where there could be conversation.

Who to blame for this? Maybe our willingness to believe that everything we think, we know. Maybe the ordination of academia, the conferring of authoritative status to those who know so much about so little. It’s far too easy to think that because we’ve spent a long time studying a particular topic that the methods we use to understand that thing are just as applicable to other pursuits of truth.

The intellectuals I love, on the other hand—the brightest and most thought-provoking ones, many of them folks who hold enviable research positions at NASA, MIT, the NIH—don’t think they know that much about anything! They don’t even think they can know as much as they’d like about the topics that are most important to them. And they are often the most humble about their own area of expertise because they’re aware of how so often one discovery can open up deeper and more complex questions about related areas of investigation, setting us once again in the middle of a sea of questions, rather than answers.

I have been lucky in my life to have fallen into the company of some unbelievably wise, spiritually motivated scholars, and to have worked with and for them to help break down some of the automatic assumptions different groups tend to hold about science or about faith. After MIT, I took a job as a communications specialist with the American Scientific Affiliation, a group of scientists who are also dedicated Christians. They’re not an advocacy group for any particular point of view, and in fact membership is open to people who believe a wide range of things about hot topic issues like evolution and the age of the earth (although most of the folks who reject evolution have exited the ASA to pursue advocacy elsewhere).

My first ASA annual meeting was one of the most eye-opening intellectual experiences of my life. Never before have I been in the company of people more simultaneously passionate and humble about their work and ideas. They gather together to discuss all kinds of things—insights onto Christian faith from cosmology, neuroscience, molecular biology, and history of science; formulations on how we should use technology and the opportunities associated with various types of research and engineering. And of course, the classic science-faith discussions: How we got here, when and how human consciousness and morality developed, what kind of action God takes in the world versus what self-correcting processes God put in motion and how our view of these things change our understanding of scripture and ourselves. When ASAers disagree and are critical, they thank each other for voicing those critiques and for pointing out errors of logic or judgment. Then they put the debates aside, sharing meals and time for worship every day. Before the ASA, I had no idea it was possible to find company so intellectually and spiritually challenging, supportive, and inspiring all at the same time.

I have also been blessed to work with the scholars of the BioLogos community as Web Editor for their daily blog. I now hold a dual appointment with these two organizations, and while the work is always related to deeper knowledge of the relationship between science and faith, the goals are different. BioLogos is an advocacy group where ASA is an open community. The goal of BioLogos as an organization is to increase science literacy among evangelicals, particularly on the topic of origins, and to show how belief in evolutionary creation doesn’t have to threaten the foundations of faith—and can, in fact, deepen it with renewed awe and wonder.

I love my work for BioLogos because I’ve never interacted with an advocacy group that is so firmly dedicated to its own humility, to graciousness and gentleness of voice and posture—to making a concerted effort to understand and appreciate the viewpoints of those who disagree with us, while holding respectful conversations and attempting to change the hearts and minds of those who reject evolution as a valid Christian worldview. We have a style guide that reminds me of the most basic lessons we learned in Sunday school on Christian love and humility: “Write about other individuals as if you had just had coffee with them and they are in the room with you. If you are a Christian writing about other Christians, write as if you just worshipped together as fellow believers … When critiquing another view, always critique a view, not the person who holds it. Similarly, respect the motives of others. Don’t describe your critics or those who disagree with you as being afraid, ignorant, stubborn, or as faithless, compromised, etc. … Don’t make sweeping generalizations of a group you disagree with—they are usually not true. If you identify weaknesses or blindspots in another perspective, acknowledge the weaknesses of your own perspective or challenges that it faces.”

What if all political, social, religious, and scientific groups the world over adopted such an approach to dialogue and their own desires? What if we didn’t have to be snide and aggressive to get our point across and to elicit cheering (or jeering) from our respective constituencies? Perhaps the BioLogos approach will prove naïve, too optimistic for a jaded world and its cynical citizens. But we have some evidence to suggest that’s not the case. And I, for one, would rather live in the hope that positive change really can be effected through gentleness rather than bellicosity, peacefulness in place of hostility.

In a world like that, I think we would never be surprised to discover that a scientist has a deep faith commitment or a Christian accepts the evidence for evolution. I’m happy to report that at certain times and in certain places, this impossible world already exists.