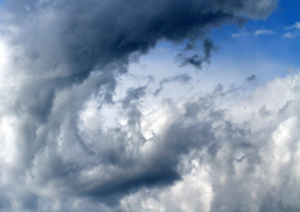 This week’s post is from Sir John Houghton, former Director General of the British MET Office, and former co-chair of the scientific assessment working group of the IPCC. This post was adapted from a chapter from the book Real Science, Real Faith (Monarch, 1991)*

When people discover that I am involved with weather forecasting and also that I am a Christian, I am often asked if I believe that there is any point in praying about the weather—praying for rain, for instance, when it is badly needed. I reply that I believe it is entirely sensible and meaningful to pray about the weather as, indeed, it is to pray about other things. But I also say that my belief in the meaningfulness of prayer in no way alters my determination as a scientist to develop the very best means of weather forecasting, nor does it cause me to doubt that the behaviour of weather systems follows deterministic scientific laws.

One of the outstanding successes of science over the last thirty years has been that of weather prediction through the use of computer models of the atmospheric circulation. Meteorologists have no doubt that the atmosphere is basically a deterministic system, in other words, that the atmosphere’s future behaviour is determined by its present state and by the laws of physics. This does not mean that weather prediction can ever become an exact science. One of the main reasons for this is that the atmosphere is what is known as a chaotic system—a technical term for a system in which developments occur which are extremely sensitive to the initial conditions.

My belief, on the one hand, in the reality of prayer and, on the other, in the scientific study of the material world as a deterministic system may seem at first to be contradictory. At best, it may seem that my life as a scientist and my religious life are in separate compartments. This, however, is not the case. It is very important to me that the two strands of my life, as a scientist and as a Christian, are brought together side by side and, so far as it is possible, intertwined. How, therefore, can the idea, on the one hand, that God is active in the world and, on the other, that events are governed by scientific laws be reconciled? The clue, I believe, is in making God big enough. To do that it is necessary to really stretch our ideas and imagination. I believe science can help in this.

As astronomers have probed the universe with their telescopes—optical and radio telescopes on the ground, X-ray, ultra-violet and infra-red telescopes out in space—they have been able to discover a great deal about the processes going on in the stars, the galaxies and the space in between. Many new objects have been identified; quasars, pulsars and black holes. One of the remarkable features of this story of discovery is that the physical laws which govern what is going on in widely different parts of the universe are the same physical laws which describe events here on earth. In fact, a major achievement of modern science has been the way in which it has been possible to apply the physics of the very smallest components of matter (which are as many orders of magnitude smaller than us as the universe is larger) to reach some understanding of what is known as the Big Bang—that singular event over ten billion years ago from which the expansion of the universe began.

We all know what it means to create something—a painting, a three course meal, a computer programme—we are creating all the time. Just try to imagine the skill and power of the One who has conceived and created the universe and who continues to maintain it in being. He is the God we are trying to think about. The size, the complexity, the beauty and the order we find in the universe are expressions of the greatness, the beauty and the orderliness of the Creator.

Created along with the universe is its framework of space and time. This means that when we think of the Creator we think of him as being outside the space and time dimensions of our world and of our experience. That does not mean, as some suggest, that God is not present and active in the world; but it does mean that he is not confined by it. Because God’s activity continually pervades the world, I do not like to talk about God intervening in our world. Although he may seem to be in some events more than others, he is in a real sense present with us all the time.

In the Gospels we find Jesus emphasising God’s control over the world and God’s concern for even the smallest events. A sparrow cannot fall to the ground without our heavenly Father’s knowledge (Mt 10:29). Jesus encouraged his followers to look at events and circumstances in terms of God’s activity. He chided the Pharisees, the religious leaders of the day, for their blindness. When they wanted to forecast the weather, their interpretation of the sky was quite good, he told them, but their interpretation of the events of the times was seriously lacking (Mt 16:3). In other words, their meteorological science was effective, but they were blind towards any appreciation of God’s activity in the world.

This post is a series of excerpts from Sir John Houghton’s chapter in the book Real Science, Real Faith (Monarch, 1991), reproduced online by permission of the publisher. You can read the full chapter here.